Home » Amazfit » Amazfit Stratos (Pace 2) vs Amazfit Pace: Is it worth an upgrade?
AmazfitComparisonsHealth Tech GuidesSmartwatch

Amazfit Stratos (Pace 2) vs Amazfit Pace: Is it worth an upgrade?

The Amazfit Stratos and the Amazfit Pace are both affordable smartwatches developed by Huami. The Stratos is the second generation smartwatch and the sequel to the Pace; it features a different design and some new features but also comes with a substantial price increase.

The Amazfit Pace was one of the hidden gems of the 2017 smartwatch market and in 2018 it still represents one of the best value smartwatches. The Stratos is newer, but has an untested design. I’ve been using both watches for the past few weeks and I’ve established their strengths and weaknesses. This is a comprehensive comparison between the two flagship Amazfit smartwatches, by the end of this post you should know which one is best for you!

Let’s take a look at the specs of both smartwatches

The two smart watches are very similar in terms of specifications. The main difference between the two is that the Stratos is waterproof to 50m depth, an impressive feat. This means you’ll be able to go swimming and take it in the shower without damaging it. The design is also drastically different, but I’ll get into that later.

Both watches have the same tracking abilities, which include heart rate, calories, steps, distance, speed and pace. You’ll also have access to fitness programs on both watches as well as a compass and weather reports.

The screen on the Stratos is OLED which tends to work better in low light, however the battery life is also reduced despite having the same mAh. Do these minor updates justify upgrading your smartwatch, or paying more than you would for the Pace? It’s hard to tell, because a choice for smartwatch usually comes down to your design preference.

Wearables are unique in the consumer tech category because the design is extremely important. Not only does it have to look good but it has to be comfortable for a wide range of people. Smartwatches in particular need to appeal to a broad spectrum if they are going to be successful. 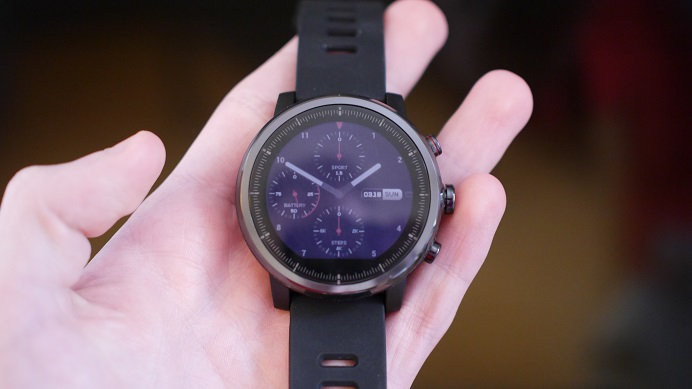 The Stratos is the larger of the two watches, it has a round face and a silicone strap. The watch faces are interchangeable and there are dozens of options to choose from. The screen is visible even without a back-light, but if you move your wrist to look at the watch a blue back-light will make the watch face more visible.

The Pace is more slender and sleeker looking. It’s around a third of the thickness of the Stratos and only has 2 manual control vs 3 large buttons. The watch face can also be changed on the app and the back-light works the same way.

Here are a few images of the watches together: 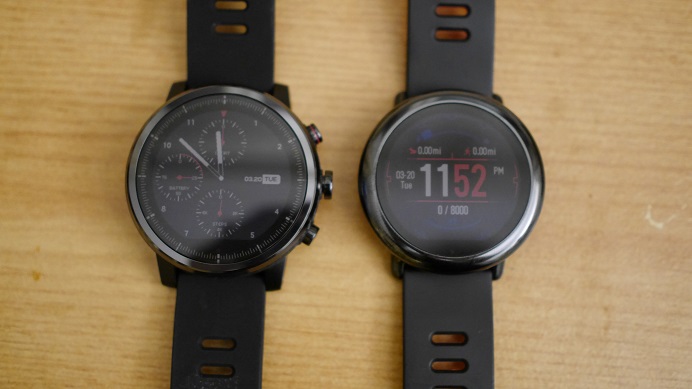 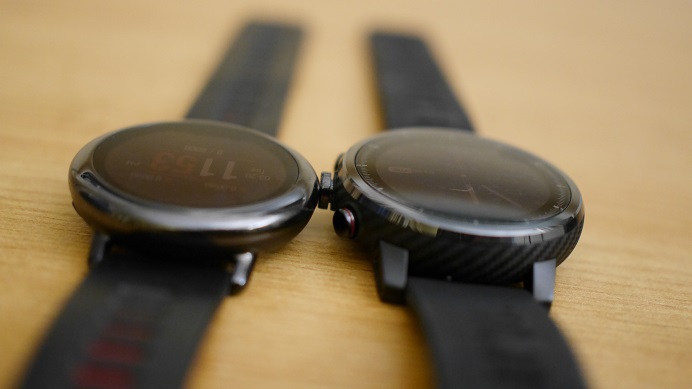 The Stratos is certainly the more rugged and sportslike device, whereas the Pace is more generic. Both watches look great and have a screen resolution high enough to avoid visible pixels. 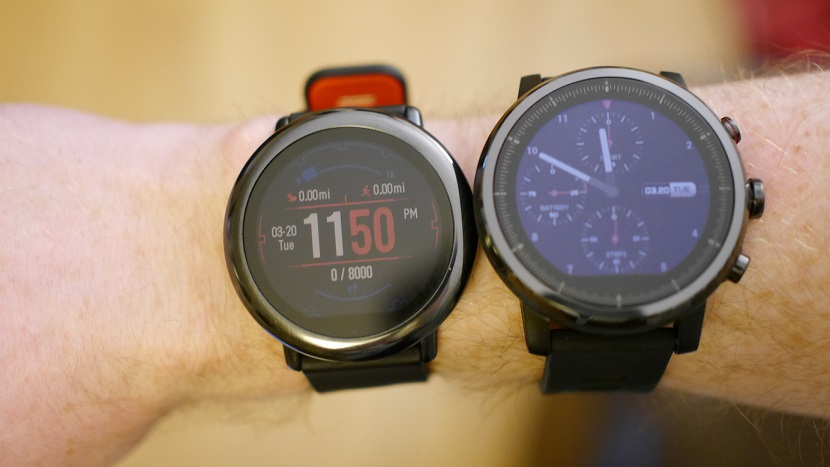 With the Stratos being much larger it may not be suitable for people with thin or small wrists, and I think most women would struggle to pull it off. As someone with thin wrists I prefer the smaller design of the pace, I also prefer the orange silicone strap which gives the Pace a more unique look.

Both watches use the same Amazfit app and can connect wirelessly. The App is actually one of my favorite things about the device; it’s very easy to use and provides a lot of data after you’ve been using either watch for a while. As both the Pace and the Stratos have the same tracking abilities you’ll have access to the same sets of data.

The Amazfit Stratos and Pace are both amazingly good value smartwatches with specs that match much more expensive devices. The Stratos is newer, but more expensive (see price here), whereas the Pace (see price here) lacks the water resistance and updated screen. Does the Stratos justify it’s higher price? If you are a particularly sporty person who is likely to use the water resistance and scratch resistance screen, then it could be, however I personally prefer the thinner design of the Pace.

The Amazfit Pace is Available on Amazon

The Amazfit Stratos is Available on Gearbest

Pulse Oximeter: What is is, how to use it and which one to get