So you are looking for a waterproof smartwatch. Something you can wear while swimming, diving, skiing or any other activity that would destroy a weaker watch. You’ve come to the right place! I’ve done your research for you and found 7 awesome waterproof smartwatches and fitness trackers that can survive up to a depth of 50 meters. I’m going to take you through each watch, set out their specs and help you decide which one is right for you. Let’s get started! 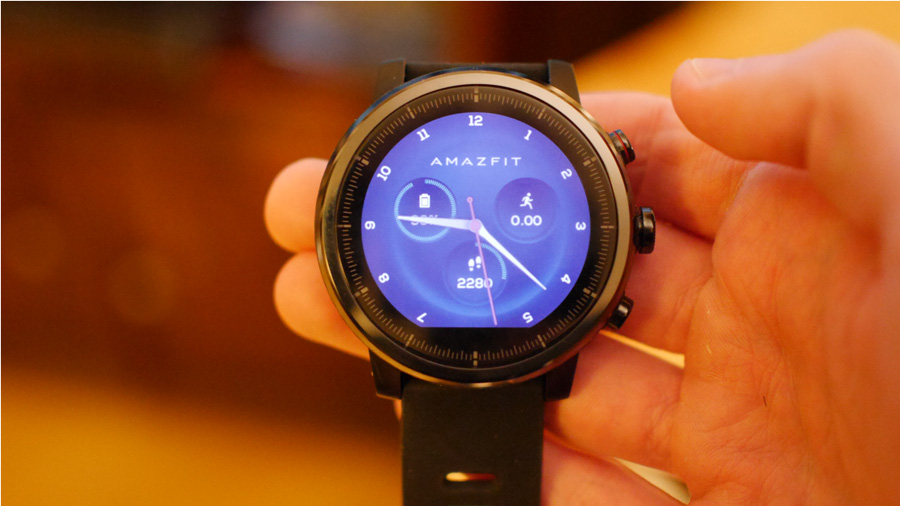 The Amazfit Stratos is the latest device from the China based Amazfit. Previous versions of this watch have been well received as low cost options with many of the same features as other smartwatches. The biggest upgrade that the Stratos brings is water resistance as you can now take it up to 50m underwater without issue. The watch has built in fitness monitoring programs for various sports,including swimming. It’s screen is made from gorilla glass which offers slightly more protection. 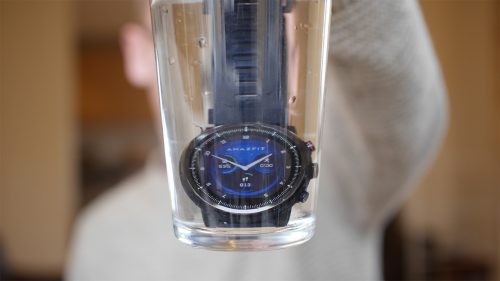 The Stratos have a large variety of sensors including a heart rate monitor, GPS, accelerometer, pedometer and barometer. You can connect to your smartwatch for app notifications, however you can’t reply via the watch or take calls directly from the watch. The Stratos is also one of the thicker smartwatches around so may not be suitable for those with thinner wrists.

Compared to the other smartwatches in this list the Stratos is probably the best value, but it’s missing some more advanced features and has a more basic design. For swimmers who want an affordable smartwatch with all the same tracking capabilities as much more expensive products, then the Stratos is an excellent choice

The Fitbit Ionic is the first fully fledged smartwatch from Fitbit, who usually stick to smaller fitness trackers. Fitbit have ensured that their flagship watch is usable for those who want to wear it in water by making the device waterproof to 50 meters.

The Ionic features Gorilla Glass 3 which is reasonably resistance to scratches, but not indestructible! The screen has a fairly average resolution of 348 x 250 pixels, but the LCD technology makes for bright, clear colors. The watch is definitely geared towards sports and fitness and comes packed with a 3-axis gyroscope,  heart rate monitor, altimeter, ambient light sensor and GPS.

While the hardware is reasonably impressive, where Fitbit excels the most is software, which has been developed over many years and is considered an industry leader in fitness tracking. The Fitbit app is probably the most user friendly with the most options for monitoringand tracking your health and fitness.

The Fitbit Ionic isn’t the cheapest waterproof smartwatch, but it’s also not the most expensive. It’s pretty thin considering the amount of hardware it has, but I think there are better looking watches out there too.

Samsung entered the smartwatch game fairly early and quickly established themselves as a leader in smartwatch innovation. Their previous smartwatches have focused on casual users, however the new Gear Sports is definitely more activity focused and comes with a 50m water resistance rating.

The Super AMOLED screen looks excellent and is among the clearest of any smartwatch, rivaling some smartphones. Like most smartwatches the Gear Sport uses gorilla glass for protection against scratches and impacts. The design of the Gear Sports does stand out from the crowd and uses premium materials. The Gear Sport features all the tracking sensors you would expect from a high end smartwatch, including GPS, Accelerometer, Barometer, Heart Rate and Gyro sensor, as well as a duel core processor to make sure everything runs smoothly.

With the Gear Sports you are getting a device from a consumer tech leader, with the premium feel and experience we’ve come to expect from Samsung devices. If you are a particular fan of Samsung products and want a waterproof watch with an epic screen then you should definitely consider the Gear Sport. 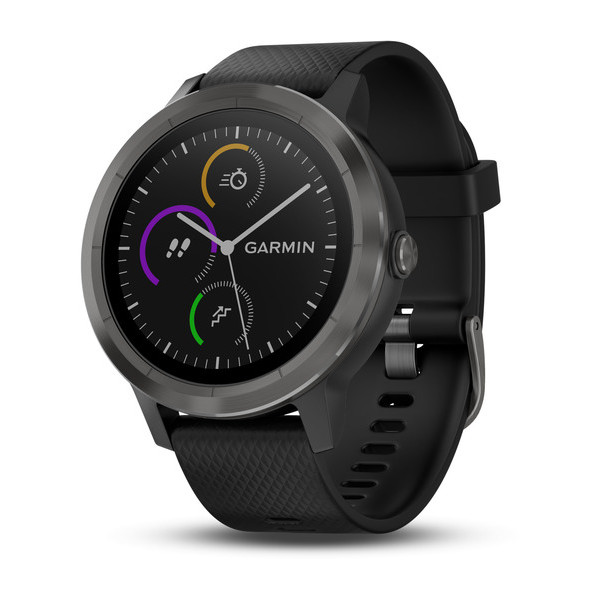 Garmin have been producing consumer tech for fitness fanatics successfully for a while now, so it’s no surprise their latest wearable is perfect for health tracking. The Garmin VivoActive isn’t necessarily the best when it comes to water resistance, with a rating of 5m, but I’m including it on this list for its other features. Having said that, 5m water resistance is perfectly find for casual swimmers, but I would avoid diving while wearing it.

The stainless steel body contains a amazing amount of hardware and sensors including GPS/GLONASS, Garmin Elevate wrist heart rate monitor, Barometric altimeter, Compass, Accelerometer, Thermometer. The VivoActive is designed to look like a normal watch but have all the advantages of a premium smartwatch 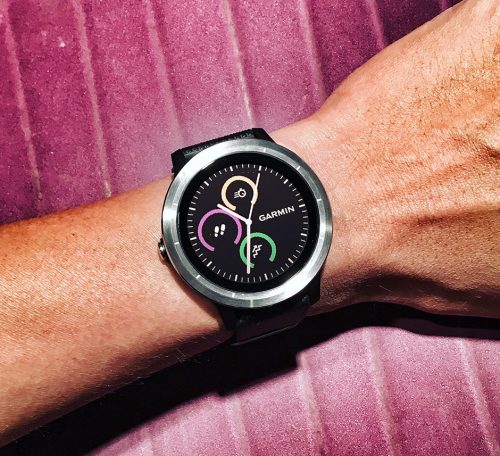 The software installed in the watch allows you to track over 15 sports automatically, including swimming. The VivoActive will also track your calories, steps and heart rate and display this on its 1.2 inch screen. While the VivoActive doesn’t give you the most options when it comes to water resistance, it makes up for this with a huge array of tracking features and a rugged design. 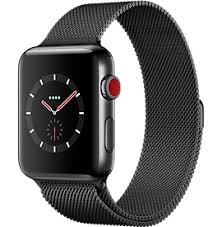 The third series of Apple’s hugely successful smartwatch range could be the most feature packed smartwatch ever. Most importantly for the purposes of this article, the flagship apple smartwatch is now water proof to 50m.

The aluminium casing sets the Apple watch apart from many other smart watches that stick to plastic, and the OLED retina display could be the best watch display ever. The tiny watch manged to pack an incredible amount of hardware into its slim frame, including  GPS, GLONASS, Galileo, and QZSS, Barometric altimeter, Heart rate sensor, Accelerometer, Gyroscope, Ambient light sensor and 8GB memory. The memory storage is quite impressive compared to most other smart watched which struggle to provide a few GB. 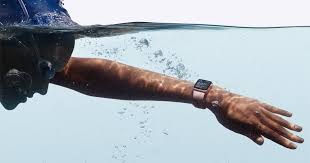 The Apple watch comes in either GPS mode or GPS + cellular, which allows you to make calls directly from the device. You can also reply to messages from the watch and receive notifications from dozens of apps.

Apple may have mastered the every day smartwatch, but this device isn’t without its flaws. Just 18 hours of battery means you’ll have to charge every night and it lacks some of the inbuilt fitness programs found in other smartwatches. You’ll also have to pay the apple premium price, as with all their products. 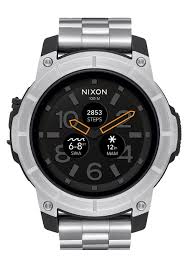 You may have never heard of this brand, but Nixon are the first company to produce a smartwatch specifically for action sports. The Nixon Mission is built to withstand a beating with a poly-carbonate shock resistant case and surgical grade stainless steel bezel; if you don’t want to worry about your watch being destroyed by a few knocks and bumps, then the Nixon Mission is your best bet.

As well as being shockproof the Mission is also waterproof to 10m, with an upcoming case to make it completely waterproof even at lower depths. Even though the Nixon Mission water resistance is limited to 10m, it’s shock resistance means you can use it during high impact water sports such as surfing and water-skiing. 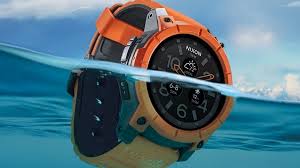 As well as its impressive design the Nixon Mission also features all of the sensors expected in a premium smartwatch, it also has a high resolution AMOLED screen covered in gorilla glass for even more protection.

All of this technology and the materials used to protect it mean that the Mission is a pretty bulky watch and probably not suited to those used to slim devices. Still, for anyone who wants to ensure their device survives extreme conditions, this is pretty much your only option. 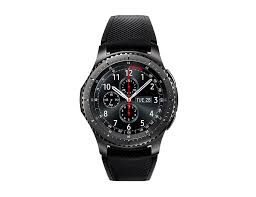 The final smartwatch in my list of top waterproof smartwatches is another Samsung device. This time the Gear Frontier which compared to its brother the Gear Sports, is an entirely different beast. The Gear Frontier is Samsung’s flagship smartwatch, so it comes with more features, an improved design and a larger price tag.

While the Gear Frontier is water resistant, it can only handle 1.5m depth for 30 minutes. This is still suitable for shallow swimming in a pool or the sea, but not for diving or for longer swims. I’m still including it in this list because it has possible the most features of any smartwatch. As well as all the usual tracking capabilities and sensors, the Frontier is able to call and receive messages without the need of a smartphone. 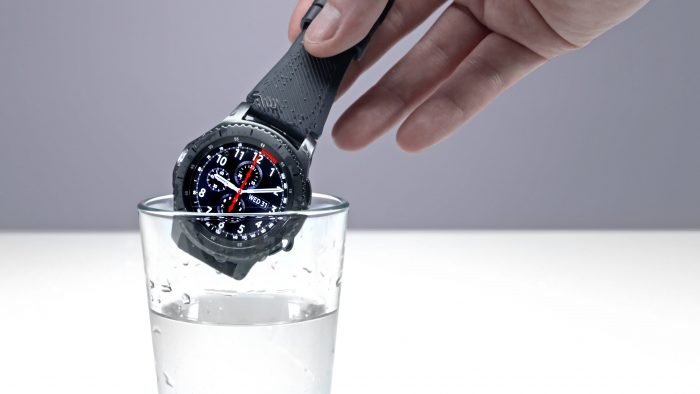 The super AMOLED screen has a high pixel count and looks stunning. The stainless steel materials and the classic design could almost fool an observer into thinking this was a designed brand; it’s certainly one of the best looking smartwatches of the year.

You should consider the Gear Frontier if you want a truly premium device with a classic style and nearly all the functionality of a smartphone on your wrist.